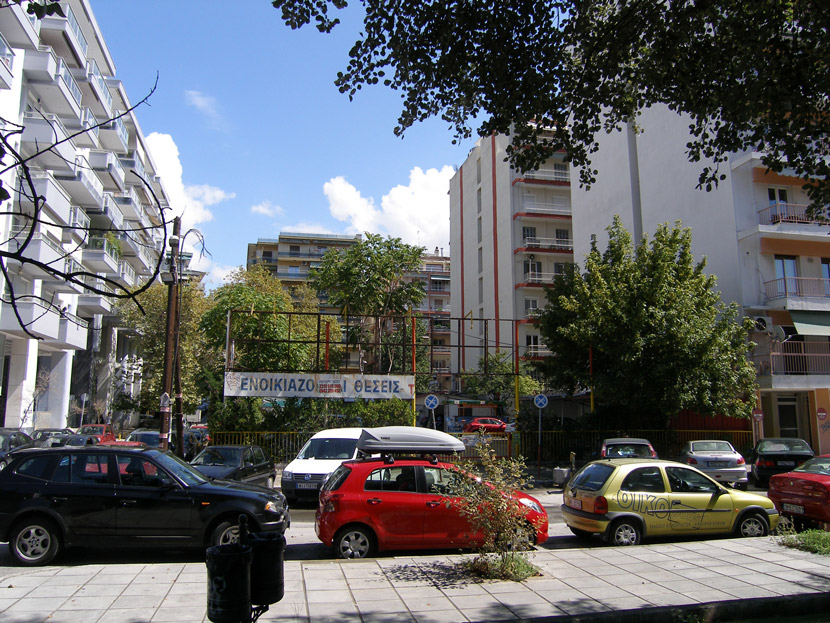 The land plot is located in the Faliro area of the 5th Municipal District of the Municipality of Thessaloniki, facing Vas. Olgas Avenue and Paraskevopoulou and Alex. Michailidi Streets, at a distance of just 1.5 km from the city’s historic centre.

The property has a final surface of 855.58 sq. m. and today it is undeveloped and used as an outdoor parking lot. It stands between two of the city’s most important thoroughfares, Vas. Olgas Avenue, which leads to the city centre, and the coastal Meg. Alexandrou Avenue, with an eastern direction.

The “Avenue of the Exohes [Countryside]”, as it was once known, Vas. Olgas is a thoroughfare of great historic significance. Especially in the Faliro area, we encounter mansions built in the late 19th and early 20th centuries, such as Villa Themeli (Michailidis Residence), Villa Tzemporga (owned by the Italian consulate), Villa Hatzimisef (1st Gymnasium of Thessaloniki) and Villa Hafiz Bey (School for the Blind).

The property has direct access to Meg. Alexandrou Avenue and by extension to the city’s New Waterfront [Nea Paralia], which recently underwent an extensive redevelopment and is one of the most popular public areas with the city’s residents.

The redesign of the city’s waterfront, from the White Tower to the Thessaloniki Concert Hall, includes recreation spaces, green commons with trees, playgrounds, and twelve thematic parks that attract people of every age and provide opportunities for recreation, play, relaxation, educational and cultural activities.

The area is a much-frequented part of the city, with heavy pedestrian traffic and a large number of stores, office buildings, hotels, restaurants, coffee shops, bank branches and green areas. The site of the land plot offers the perfect combination between the vibrant, active environment of Vas. Olgas Avenue and the quiet, verdant and mild character of the New Waterfront.

The neighbourhood has frequent public bus service, while the future “Papafi” station of the Thessaloniki Metro lies at a distance of just 800 m.

The land plot, with an original area of 1,000.00 sq. m., based on the street planning decree and the settlement and actuarial acts that have been implemented in the area, is zoned as an independent, complete and buildable land plot with a final area of 855.58 sq. m., facing Vas. Olgas Avenue along 17.95 m., Paraskevopoulou Street along 49.81 m., and Alex. Michailidi Street along 16.00 m.

Inside the eastern building core, with 100% potential building coverage and according to current zoning laws, an 8-story building may be erected consisting of a basement, ground floor, 7 standard floors and a loft, with a total area of 3,250.00 sq. m., for development.

The areas per level are:

The eastern part of the land plot has great projection thanks to its location, as it is a corner plot on a commercial thoroughfare (Vas. Olgas) and on Paraskevopoulou Street, which is a one-way descent from the east that terminates at this point.

(on Paraskevopoulou and Alex. Michailidi Streets)

Inside the western building core, with 100% potential building coverage and according to current zoning laws, a 9-story building may be erected consisting of a basement, ground floor pilotis, 8 standard floors and a loft, with a total area of 2,656.00 sq. m., for development.

The future building shall face Alex. Michailidi Street on a green commons and beyond that will have an unimpeded view of the New Waterfront and the Thermaikos Bay.

The areas per level are: 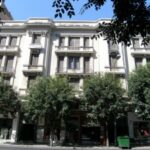 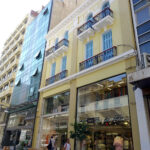