The three-story listed building of offices and stores, located at no. 6, Ermou Street in the 1st Municipal District of the Municipality of Thessaloniki, is built on a 190.00 sq. m. land plot and consists of a basement, ground floor with mezzanine, two stories and a loft. It was constructed in 1925-1930 by the architect S. Modiano (building permit no. 1182/1925) on land plot no. 3 of city block 136 in the 3rd sector of the Thessaloniki burnt zone, commissioned by I. Nechamas and A. Aggelidis.

The building faces Ermou Street, very centrally located on one of the most important commercial thoroughfares of the city’s historic centre. It is at the centre of the old Francomahala (Frankish neighbourhood) of Ottoman Thessaloniki, near Hrimatistiriou Square, which is a historic city landmark. In the area we encounter several important buildings from the late 19th and early 20th centuries, such as the Ottoman Bank (present-day State Conservatory of Thessaloniki), the Jewish Museum of Thessaloniki, the Catholic Church, and the building with the characteristic large clock that adorns its façade since the 1950s, known as Malakopi Gallery.

The area of the old stock exchange (Hrimatistirio), where the building is located, has been included in a study for redevelopment and bioclimatic upgrades that was recently implemented and includes interventions to broaden the pedestrian sidewalks, aesthetically improve the urban landscape and street lighting, and support for the area’s commercial operations.

The area has been visibly improved and is expected to become a popular destination for locals and visitors to the city. In addition to the bioclimatic upgrades, this has created incentives for the renovation of all existing building stock.

The building is listed (GG 734 D / 28.11.1983). It is a characteristic example of the architecture of the period between the two world wars, with Art Nouveau elements and partial references to neoclassicism, and it is part of the eclectic style of the first decades of the 20th century.

The building’s bearing structure consists of reinforced concrete and the partition walls are constructed of stretching and header brickwork courses.

The entire area of the building’s covered spaces is 835 sq. m. (primary and auxiliary).

The basement covers the entire area of the building and extends beyond the building line along the façade. It consists of one unified storage area and two smaller store rooms, and it is accessible through an interior staircase from the left-side ground-floor store. It measures 205.50 sq. m.

The ground floor consists of two stores, facing Ermou Street in the front and the land plot’s uncovered area (backyard) in the back, of 82 sq. m. and 76 sq. m., respectively. Each store consists of a unified space and a staircase leading to the mezzanine. The total area of the ground floor level is 158.00 sq. m. 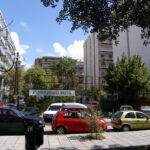 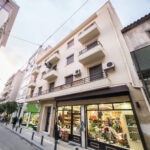